Kick off your visit on the 2nd (Sun): take in the architecture and atmosphere at Basilica di Maria Ausiliatrice, then take in the exciting artwork at Reggia di Venaria Reale, then examine the collection at Museo Nazionale dell'Automobile, and finally don't miss a visit to Chiesa di Santa Maria del Monte dei Cappuccini. On the next day, admire the masterpieces at Museo Egizio, wander the streets of Via Roma, and then see the interesting displays at Museo Nazionale del Cinema. 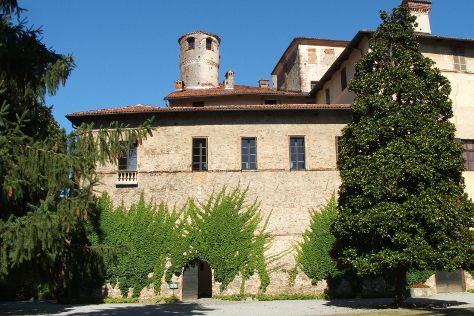 ©
Cuneo is a city and comune in Piedmont, Northern Italy, the capital of the province of Cuneo, the third largest of Italy’s provinces by area.It is located at 550 metres (1,804 ft) in the south-west of Piedmont, at the confluence of the rivers Stura and Gesso.Including all bordering municipalities Beinette, Borgo San Dalmazzo, Boves, Busca, Caraglio, Castelletto Stura, Centallo, Cervasca, Morozzo, Peveragno, Tarantasca and Vignolo the population is 123,301 inhabitants.It is near six important mountain passes: Colle della Maddalena at 1996mColle di Tenda at 1871m - Tunnel of Tenda at 1300m, 3km longColle del Melogno at 1027m Colle San Bernardo at 957m Colle di Nava at 934mColle di Cadibona at 459m. Start off your visit on the 4th (Tue): explore the historical opulence of Castello della Manta, then learn about winemaking at Marchesi di Barolo - Sede legale, magazzini e spedizioni, then learn about winemaking at Azienda Agricola Ca Neuva, and finally pause for some serene contemplation at Santuario Basilica di Montis Regalis. Get ready for a full day of sightseeing on the next day: appreciate the extensive heritage of Centro storico, identify plant and animal life at Centro Recupero Animali Selvatici, then take in the spiritual surroundings of Santuario di San Magno, and finally explore the historical opulence of Forte Albertino.

For reviews, other places to visit, and other tourist information, you can read our Cuneo trip planner.

Drive from Turin to Cuneo in 1.5 hours. Alternatively, you can take a train; or take a bus. While traveling from Turin, expect a bit warmer days and about the same nights in Cuneo, ranging from highs of 79°F to lows of 60°F. Wrap up your sightseeing on the 5th (Wed) early enough to travel to Biella.
more less

To find reviews, where to stay, ratings, and tourist information, you can read our Biella travel itinerary planner.

Traveling by car from Cuneo to Biella takes 2.5 hours. In June in Biella, expect temperatures between 81°F during the day and 61°F at night. Wrap up your sightseeing by early afternoon on the 7th (Fri) to allow enough time to travel back home.
more less

Things to do in Biella