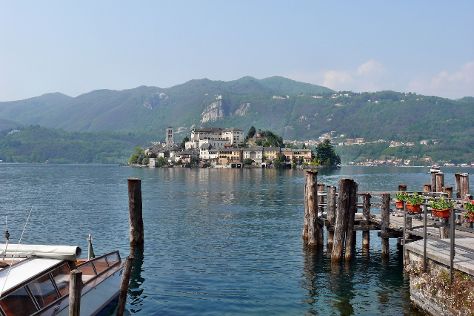 ©
Orta San Giulio is a town and comune (municipality) in the Province of Novara in the Italian region of Piedmont, located about 100km northeast of Turin and about 40km northwest of Novara.The town itself is built on a promontory which juts out from the eastern bank of Lake Orta close to Isola San Giulio, an island which also falls within the municipal boundaries. On the 28th (Wed), appreciate the history behind Statue of San Carlone, shop like a local with Palazzo Borromeo, thenadmire the natural beauty at Botanical Gardens Of Villa Taranto, and finally contemplate the waterfront views at Lake Orta. On the 29th (Thu), you'll have a packed day of sightseeing: learn about wildlife with up-close encounters at Safari Park and then contemplate the waterfront views at San Giulio Island.

For traveler tips, where to stay, maps, and tourist information, refer to the Orta San Giulio attractions planner.

Turin to Orta San Giulio is an approximately 2-hour car ride. You can also take a train. Expect a bit warmer weather when traveling from Turin in August: highs in Orta San Giulio hover around 83°F, while lows dip to 62°F. Finish your sightseeing early on the 30th (Fri) to allow enough time to drive to Turin.
more less

Things to do in Orta San Giulio

To find maps, reviews, where to stay, and more tourist information, use the Turin holiday planner.

You can drive from Orta San Giulio to Turin in 2 hours. Another option is to take a train. When traveling from Orta San Giulio in August, plan for little chillier days in Turin, with highs around 76°F, while nights are about the same with lows around 64°F. Cap off your sightseeing on the 3rd (Tue) early enough to travel back home.
more less