Plan created by another user.Make it yours
Edit start date
Want to change plan duration?

A large city of over 1 million stands at the center of the municipality of Campinas.

To see maps, where to stay, and tourist information, go to the Campinas tour itinerary planner.

Curitiba to Campinas is an approximately 3.5-hour flight. You can also drive; or take a bus. The time zone changes from Brasilia Standard Time (BRT) to Amazon Standard Time (AMT), which is usually a -1 hour difference. On the 22nd (Sat), you'll travel to Lisbon.
more less

Things to do in Campinas

Built on seven hills, Lisbon has experienced a renaissance in recent years, making it the cultural star of Portugal.

For more things to do, reviews, ratings, and other tourist information, you can read our Lisbon trip app.

You can fly from Campinas to Lisbon in 14 hours. The time zone difference moving from Amazon Standard Time to Western European Standard Time is 4 hours. In August, daytime highs in Lisbon are 35°C, while nighttime lows are 20°C. Cap off your sightseeing on the 23rd (Sun) early enough to travel to Vienna.
more less

The cultural, economic, and political center of the country, Vienna has developed from its early Celtic and Roman roots into a medieval and Baroque city, with an old town that was designated a World Heritage Site in 2001.

Discover how to plan a Vienna trip in just a few steps with Inspirock's itinerary builder.

Things to do in Vienna 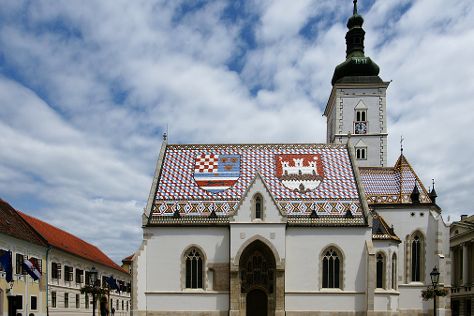 Zagreb boasts a combination of Austro-Hungarian and Socialist architecture, but it is beloved for its outdoor cafe culture.

Plan trip to Zagreb with our itinerary maker to find out where to go and what to do.

You can drive from Vienna to Zagreb in 4 hours. Other options are to fly; or take a bus. In August, daily temperatures in Zagreb can reach 32°C, while at night they dip to 17°C. Cap off your sightseeing on the 26th (Wed) early enough to catch the bus to Plitvice Lakes National Park.
more less

Things to do in Zagreb

Kick off your visit on the 26th (Wed): take in the dramatic scenery at Pevalekovi Slapovi, thenexplore the activities along Gavanovac Lake, and then explore the striking landscape of Plitvice Lakes National Park.

For ratings, reviews, more things to do, and tourist information, refer to the Plitvice Lakes National Park online holiday planner.

You can take a bus from Zagreb to Plitvice Lakes National Park in 2.5 hours. Alternatively, you can drive; or take a train. Finish your sightseeing early on the 26th (Wed) to allow enough time to take a bus to Zadar.
more less

Things to do in Plitvice Lakes National Park 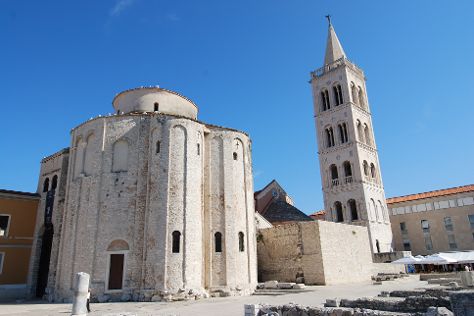 Situated along the Adriatic Sea, Zadar preserves a medieval old town that is entirely contained on a peninsula.

For other places to visit, more things to do, traveler tips, and other tourist information, read our Zadar day trip planning tool.

You can take a bus from Plitvice Lakes National Park to Zadar in 2 hours. Another option is to drive. In August in Zadar, expect temperatures between 36°C during the day and 19°C at night. On the 28th (Fri), wrap the sightseeing up by early afternoon so you can drive to Split.
more less

Things to do in Zadar 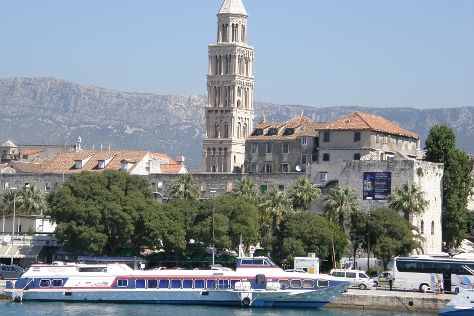 Start off your visit on the 28th (Fri): delve into the distant past at Grgur Ninski Statue.

For maps, reviews, and other tourist information, read our Split trip planner.

You can drive from Zadar to Split in 2 hours. Other options are to take a bus; or take a train. Traveling from Zadar in August, expect somewhat warmer with lows of 24°C in Split. Wrap up your sightseeing by early afternoon on the 29th (Sat) to allow time for the ferry ride to Hvar.
more less 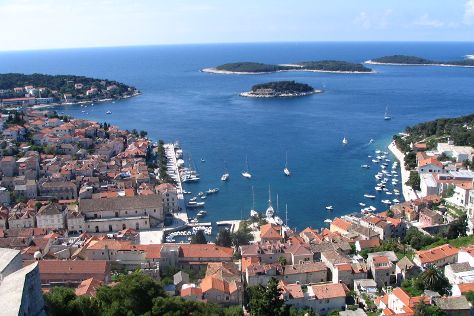 The Croatian island of Hvar serves as a picturesque location for a Mediterranean holiday, with a range of offerings from quiet coves to a lively medieval town.

Kick off your visit on the 29th (Sat): head off the coast to Jerolim. Get ready for a full day of sightseeing on the next day: learn about winemaking at Tomic Winery and then step off the mainland to explore Pakleni Otoci.

Getting from Split to Hvar by ferry takes about 2.5 hours. Other options: do a combination of ferry and taxi. August in Hvar sees daily highs of 36°C and lows of 26°C at night. Wrap up your sightseeing by early afternoon on the 31st (Mon) to allow time for the ferry ride to Split.
more less

Things to do in Hvar 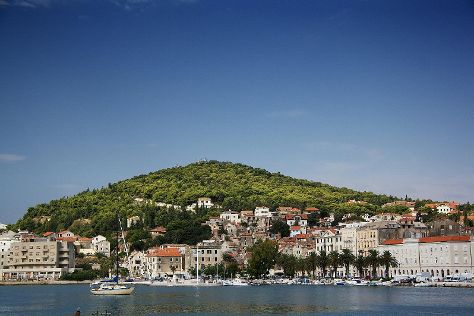 Kick off your visit on the 31st (Mon): look for all kinds of wild species at Marjan Park.

To find out how to plan a trip to Split, use our trip itinerary maker.

Traveling by ferry from Hvar to Split takes 2.5 hours. Alternatively, you can do a combination of taxi and ferry. You'll have a few hours on the 1st (Tue) to wrap things up before traveling to Dubrovnik.
more less

On the 1st (Tue), take in panoramic vistas at Upper Corner Tower Foundry Museum and then steep yourself in history at Dubrovnik City Walls. Get ready for a full day of sightseeing on the 2nd (Wed): take a stroll through Old Town and then step off the mainland to explore Lokrum Island.

To see ratings, other places to visit, and tourist information, you can read our Dubrovnik trip itinerary maker website.

Drive from Split to Dubrovnik in 3.5 hours. Alternatively, you can fly; or take a bus. In September, daytime highs in Dubrovnik are 29°C, while nighttime lows are 20°C. Wrap up your sightseeing on the 4th (Fri) to allow time to drive to Mostar.
more less

Famed for its 16th-century bridge, Mostar boasts a rich cultural and architectural heritage.

Kick off your visit on the 4th (Fri): contemplate the long history of Old Bridge (Stari Most), contemplate in the serene atmosphere at Koskin-Mehmed Pasha's Mosque, and then make a trip to Old Bridge Area of the Old City of Mostar.

For where to stay, reviews, and other tourist information, read our Mostar online route planner.

You can drive from Dubrovnik to Mostar in 2.5 hours. Alternatively, you can do a combination of car and train; or take a bus. Plan for slightly colder nights when traveling from Dubrovnik in September since evenings lows in Mostar dip to 15°C. You will have some time to spend on the 5th (Sat) before leaving for Sarajevo.
more less

Things to do in Mostar

Nearly destroyed by war during the 1990s, the riverside city of Sarajevo now serves as one of the region's major educational, cultural, and commercial hubs.

Start off your visit on the 5th (Sat): steep yourself in history at Gazi Husrev-beg Mosque, thendon't miss a visit to Sarajevo War Tunnel, and then stroll around Vrelo Bosne. On the next day, snap pictures at Latin Bridge, steep yourself in history at Sebilj Brunnen (Fountain), thenadmire the masterpieces at Galerija 11/07/95, and finally squeeze the most out of the city with City Tours.

For ratings, reviews, more things to do, and other tourist information, read our Sarajevo trip maker tool.

Traveling by car from Mostar to Sarajevo takes 2.5 hours. Alternatively, you can take a train; or take a bus. Plan for little chillier temperatures traveling from Mostar in September, with highs in Sarajevo at 26°C and lows at 11°C. On the 7th (Mon), you'll have the morning to explore before heading off to Zagreb.
more less

Things to do in Sarajevo 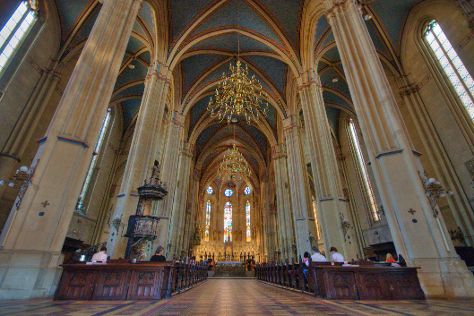 On the 7th (Mon), pause for some photo ops at Plaque of Nikola Tesla and then make a trip to Tkalciceva. Keep things going the next day: admire the landmark architecture of Cathedral of the Assumption and then wander the streets of Upper Town (Gornji Grad).

To find traveler tips, where to stay, other places to visit, and tourist information, refer to the Zagreb day trip planning tool.

You can fly from Sarajevo to Zagreb in 4 hours. Other options are to drive; or take a bus. Wrap up your sightseeing on the 9th (Wed) early enough to drive to Vienna.
more less

Things to do in Zagreb

©
Cathedral of the Assumption

On the 9th (Wed), take in the spiritual surroundings of Chapel of St. Virgil, thensee the interesting displays at The Hofburg, and then browse the exhibits of Belvedere Palace.

To see more things to do, maps, where to stay, and other tourist information, read our Vienna trip itinerary builder site.

Drive from Zagreb to Vienna in 4 hours. Alternatively, you can fly; or take a bus. On the 10th (Thu), you'll travel to Lisbon.
more less

Things to do in Vienna

Traveling by flight from Vienna to Lisbon takes 6.5 hours. Alternatively, you can drive; or take a train. Due to the time zone difference, you'll gain 1 hour traveling from Vienna to Lisbon. In September, Lisbon is somewhat warmer than Vienna - with highs of 32°C and lows of 19°C. Cap off your sightseeing on the 11th (Fri) early enough to travel to Campinas.
more less

To find where to stay, photos, other places to visit, and more tourist information, refer to the Campinas online visit planner.

You can fly from Lisbon to Campinas in 14 hours. The time zone changes from Western European Standard Time (WET) to Amazon Standard Time (AMT), which is usually a -4 hour difference. You'll set off for home on the 12th (Sat).
more less

Things to do in Campinas