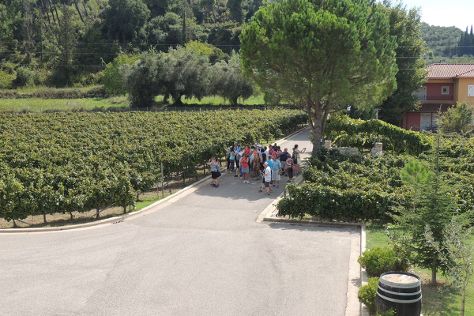 Inhabited since prehistoric times, Olympia remains best known as the site of the original Olympic Games, held there for the first time in 776 BCE.

Kick off your visit on the 25th (Thu): appreciate the history behind Hermes by Praxiteles, get engrossed in the history at Archaeological Museum at Ancient Olympia, then explore the ancient world of Olympia, and finally indulge your senses at some of the top wineries in the area. Get ready for a full day of sightseeing on the 26th (Fri): examine the collection at Archimedes Museum, then learn about winemaking at Olympia Land Winery, and then savor the flavors at Agriturismo Magna Grecia.

To find maps, reviews, other places to visit, and tourist information, refer to the Olympia trip itinerary planner.

Halifax, Canada to Olympia is an approximately 22-hour combination of car and flight. The time zone difference when traveling from Halifax to Olympia is 6 hours. Prepare for somewhat warmer weather when traveling from Halifax in May: high temperatures in Olympia hover around 28°C and lows are around 15°C. Finish up your sightseeing early on the 26th (Fri) so you can go by car to Katakolo.
more less

Things to do in Olympia

Museums Wineries Tours
Find places to stay May 24 — 26:
Hotels on TripAdvisor
Homes on Airbnb
Highlights from your plan

©
Katakolo is a seaside town in the municipality of Pyrgos in western Elis, Greece. Kick off your visit on the 27th (Sat): do a tasting at MERCOURI ESTATE S.A. - ΚΤΗΜΑ ΜΕΡΚΟΥΡΗ Α.Ε., savor the flavors at Beer-Bike Katakolo, then step into the grandiose world of Chlemoutsi, and finally look for gifts at Aristoteles Olivewood Workshop.

To see traveler tips, where to stay, more things to do, and other tourist information, read our Katakolo trip builder.

Drive from Olympia to Katakolo in 1.5 hours. In May in Katakolo, expect temperatures between 28°C during the day and 15°C at night. Finish your sightseeing early on the 28th (Sun) to allow enough time to drive to Dubrovnik.
more less

Things to do in Katakolo

Discover out-of-the-way places like Gradske Zidine and Island of Lokrum. Take a break from Dubrovnik with a short trip to Cavtat Old Town in Cavtat, about 34 minutes away. There's much more to do: get to know the fascinating history of Old Town, stop by Tedi, kick back and relax at Beach Kupari, and don't miss a visit to Dubrovnik Cable Car.

To find reviews, traveler tips, more things to do, and tourist information, refer to the Dubrovnik sightseeing planner.

Drive from Katakolo to Dubrovnik in 11 hours. Alternatively, you can do a combination of car and flight. The time zone changes from Eastern European Time (EET) to Central European Time (CET), which is usually a -1 hour difference. In May in Dubrovnik, expect temperatures between 26°C during the day and 17°C at night. Finish up your sightseeing early on the 2nd (Fri) so you can go by car to Split.
more less

Cavtat Old Town
Find places to stay May 28 — Jun 2:
Hotels on TripAdvisor
Homes on Airbnb
Highlights from your plan

Eschew the tourist crowds and head to Diocletian's Palace and Milna. Change things up with a short trip to Dubovica in Hvar (about 1:25 hours away). Next up on the itinerary: learn about winemaking at Putalj Winery, explore the world behind art at Ivan Mestrovic Gallery, make a trip to The Peristyle of Diocletian's Palace, and stop by Filigran Split.

For ratings, more things to do, where to stay, and more tourist information, read our Split custom trip planner.

Drive from Dubrovnik to Split in 3.5 hours. Alternatively, you can take a bus; or ride a ferry. In June, daily temperatures in Split can reach 32°C, while at night they dip to 20°C. Wrap up your sightseeing on the 5th (Mon) to allow time to travel to Paris.
more less

Take a break from Paris with a short trip to Palace of Versailles in Versailles, about 44 minutes away. The adventure continues: explore the world behind art at Louvre Museum, contemplate in the serene atmosphere at Cathédrale Notre-Dame de Paris, admire the landmark architecture of Arc de Triomphe, and admire the natural beauty at Luxembourg Gardens.

You can do a combination of bus, flight, and train from Split to Paris in 6 hours. Alternatively, you can drive; or do a combination of bus and train. Prepare for little chillier weather when traveling from Split in June: high temperatures in Paris hover around 27°C and lows are around 15°C. Cap off your sightseeing on the 10th (Sat) early enough to catch the train to Amsterdam.
more less

Palace of Versailles
Find places to stay Jun 5 — 10:
Hotels on TripAdvisor
Homes on Airbnb
Highlights from your plan

Known as one of the greatest small cities in the world, Amsterdam charms visitors with its cool and cozy atmosphere.

Change things up with these side-trips from Amsterdam: Grote Markt (in Haarlem) and Keukenhof (in Lisse). There's lots more to do: explore the world behind art at Van Gogh Museum, take a stroll through The Jordaan, sample the tasty concoctions at Heineken Experience, and tour the pleasant surroundings at Vondelpark.

To find traveler tips, where to stay, other places to visit, and more tourist information, you can read our Amsterdam trip planner.

You can take a train from Paris to Amsterdam in 3.5 hours. Alternatively, you can do a combination of train and flight; or drive. When traveling from Paris in June, plan for a bit cooler days and about the same nights in Amsterdam: temperatures range from 23°C by day to 13°C at night. Wrap up your sightseeing by early afternoon on the 14th (Wed) to allow enough time to travel back home.
more less

Things to do in Amsterdam