Trieste is a charming old town with a quiet atmosphere often compared to eastern European cities.

Start off your visit on the 20th (Tue): get outside with Grotta Gigante and then contemplate in the serene atmosphere at Beata Maria Vergine Assunta. Here are some ideas for day two: kick back and relax at La Spiaggia di Snoopy, pause for some serene contemplation at Cripta Degli Scavi, take in the spiritual surroundings of Basilica di Aquileia, then contemplate in the serene atmosphere at Military Memorial Redipuglia, and finally step into the grandiose world of Castello di Miramare - Museo Storico.

To see where to stay, reviews, traveler tips, and tourist information, refer to the Trieste day trip tool .

Sao Paulo, Brazil to Trieste is an approximately 18.5-hour flight. You can also do a combination of flight and shuttle; or do a combination of flight and train. Due to the time zone difference, you'll lose 4 hours traveling from Sao Paulo to Trieste. Expect somewhat warmer temperatures when traveling from Sao Paulo in August; daily highs in Trieste reach 34°C and lows reach 23°C. Cap off your sightseeing on the 21st (Wed) early enough to go by car to Venice.
more less

Things to do in Trieste

Peggy Guggenheim Collection and Doge's Palace will appeal to museum buffs. Eschew the tourist crowds and head to Basilica di Santa Maria Gloriosa dei Frari and San Giorgio Maggiore. Venture out of the city with trips to Padua (Basilica di Sant’Antonio & Scrovegni Chapel). There's still lots to do: get to know the fascinating history of Piazza San Marco, admire the striking features of Basilica di San Marco, take in the views from Ponte dei Sospiri, and contemplate the waterfront views at Canal Grande.

You can drive from Trieste to Venice in 2 hours. Other options are to take a shuttle; or take a bus. August in Venice sees daily highs of 34°C and lows of 22°C at night. Cap off your sightseeing on the 24th (Sat) early enough to catcht the bus to Verona.
more less

Padua
Find places to stay Aug 21 — 24:
Hotels on TripAdvisor
Homes on Airbnb
Highlights from your plan

Getting from Venice to Verona by bus takes about 1.5 hours. Other options: drive; or take a shuttle. In August in Verona, expect temperatures between 35°C during the day and 20°C at night. Cap off your sightseeing on the 27th (Tue) early enough to catch the train to Florence.
more less

Your inner history buff will appreciate The Baptistery of St. John and Cathedral of Santa Maria del Fiore. Explore hidden gems such as Basilica San Miniato al Monte and Church and Museum of Orsanmichele. Step out of Florence with an excursion to Historic Centre of San Gimignano in San Gimignano--about 1h 05 min away. There's lots more to do: make a trip to Piazzale Michelangelo, enjoy breathtaking views from Campanile di Giotto, get to know the fascinating history of Piazza della Signoria, and admire the masterpieces at Pitti Palace.

Before you visit Florence, use our trip planner to discover what you can do and see there.

You can take a train from Verona to Florence in 2 hours. Alternatively, you can drive; or take a bus. In August in Florence, expect temperatures between 35°C during the day and 20°C at night. Finish your sightseeing early on the 30th (Fri) so you can drive to Assisi.
more less

Historic Centre of San Gimignano
Find places to stay Aug 27 — 30:
Hotels on TripAdvisor
Homes on Airbnb
Highlights from your plan 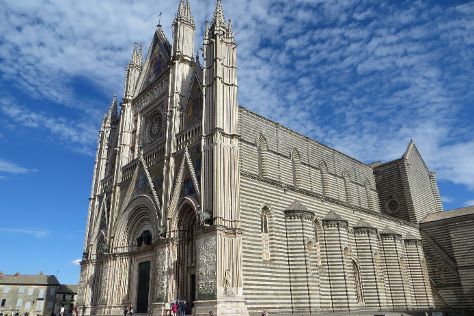 Do some cultural sightseeing at Museo della Porziuncola and Basilica di Santa Chiara. Visiting Grotte di Frasassi and Cascata delle Marmore will get you outdoors. Venture out of the city with trips to Rocca Paolina (in Perugia), Duomo di Orvieto (in Orvieto) and Cattedrale di Santa Maria Assunta Spoleto (in Spoleto). There's still lots to do: contemplate in the serene atmosphere at Basilica di Santa Maria degli Angeli - Porziuncola, go for a walk through Civita di Bagnoregio, pause for some serene contemplation at Basilica Papale e Sacro Convento di San Francesco d'Assisi, and contemplate the long history of Eremo delle Carceri.

To find traveler tips, more things to do, reviews, and tourist information, refer to the Assisi road trip tool .

You can drive from Florence to Assisi in 2.5 hours. Alternatively, you can take a train. In August in Assisi, expect temperatures between 36°C during the day and 20°C at night. Finish up your sightseeing early on the 2nd (Mon) so you can go by car to Rome.
more less

Popular historic sites such as Arcibasilica di San Giovanni in Laterano and St. Peter's Basilica are in your itinerary. Step off the beaten path and head to Chiesa di Sant'Ignazio di Loyola and Santa Maria in Trastevere. There's still lots to do: don't miss a visit to Piazza Navona, contemplate the long history of Palatine Hill, admire the masterpieces at Vatican Museums, and admire the local landmark of Trevi Fountain.

To find photos, ratings, and tourist information, you can read our Rome tour itinerary planner.

Traveling by car from Assisi to Rome takes 2.5 hours. Alternatively, you can take a train; or take a bus. Expect a daytime high around 32°C in September, and nighttime lows around 18°C. On the 6th (Fri), wrap the sightseeing up by early afternoon so you can travel back home.
more less