On the 7th (Tue), admire the local landmark of Trevi Fountain, then pause for some serene contemplation at Pantheon, and then appreciate the extensive heritage of Piazza Navona. Get ready for a full day of sightseeing on the next day: make a trip to Spanish Steps, then contemplate the long history of Roman Forum, then delve into the distant past at Palatine Hill, and finally explore the ancient world of Colosseum.

For traveler tips, ratings, reviews, and tourist information, you can read our Rome driving holiday planner.

Montreal, Canada to Rome is an approximately 12.5-hour flight. You'll lose 6 hours traveling from Montreal to Rome due to the time zone difference. Traveling from Montreal in April, things will get somewhat warmer in Rome: highs are around 24°C and lows about 11°C. Wrap up your sightseeing on the 9th (Thu) early enough to drive to Vatican City.
more less

Covering 44 hectares (110 acres) in the city center of Rome, the wall-enclosed sovereign state of Vatican City is one of the most famous religious sites worldwide, serving as the papal residence and home of the Roman Catholic church.

Vatican City is just a short distance from Rome. April in Vatican City sees daily highs of 24°C and lows of 11°C at night. Wrap up your sightseeing on the 10th (Fri) to allow time to drive to Saturnia.
more less

Things to do in Vatican City 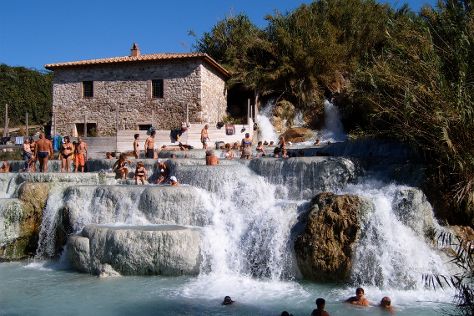 ©
Kick off your visit on the 10th (Fri): take in the natural beauty of Cascate del Mulino.

You can drive from Vatican City to Saturnia in 2.5 hours. Alternatively, you can do a combination of train and taxi. Expect a daytime high around 23°C in April, and nighttime lows around 9°C. On the 10th (Fri), wrap the sightseeing up by early afternoon so you can drive to San Gimignano.
more less

Things to do in Saturnia

Start off your visit on the 10th (Fri): learn about winemaking at Podere La Marronaia- Sosta Alle Colonne and then steep yourself in history at Torre Grossa.

To see photos, traveler tips, where to stay, and other tourist information, read our San Gimignano trip maker.

Traveling by car from Saturnia to San Gimignano takes 2.5 hours. Alternatively, you can do a combination of taxi and train; or take a bus. In April, daily temperatures in San Gimignano can reach 22°C, while at night they dip to 9°C. Wrap up your sightseeing on the 12th (Sun) to allow time to drive to Pisa.
more less 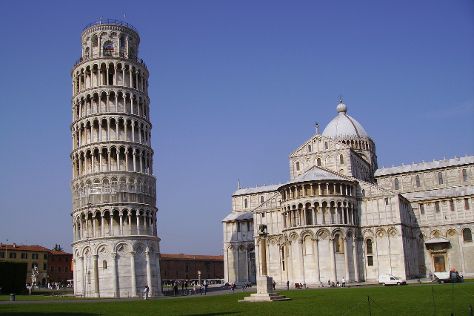 Known worldwide for the Leaning Tower of Pisa, the city of Pisa historically served as a maritime power in the heart of Tuscany.

Start off your visit on the 12th (Sun): take in panoramic vistas at Leaning Tower of Pisa.

To see photos, other places to visit, and other tourist information, go to the Pisa road trip planner.

Traveling by car from San Gimignano to Pisa takes 1.5 hours. Alternatively, you can take a train; or take a bus. In April in Pisa, expect temperatures between 22°C during the day and 9°C at night. Wrap up your sightseeing by early afternoon on the 12th (Sun) to allow time for the car ride to Florence.
more less
Find places to stay Apr 12 — 13:
Hotels on TripAdvisor
Homes on Airbnb
Highlights from your plan

Start off your visit on the 12th (Sun): appreciate the extensive heritage of Piazza del Duomo and then admire the masterpieces at Florence Academy of Fine Arts.

Drive from Pisa to Florence in 1.5 hours. Alternatively, you can take a train; or take a bus. Expect a daytime high around 22°C in April, and nighttime lows around 11°C. Finish up your sightseeing early on the 13th (Mon) so you can go by car to Venice.
more less

On the 14th (Tue), examine the collection at Doge's Palace, contemplate the long history of Ponte dei Sospiri, admire the striking features of Basilica di San Marco, take in the views from Ponte di Rialto, then don't miss a visit to Piazza San Marco, and finally explore the activities along Canal Grande.

To see traveler tips, more things to do, ratings, and other tourist information, you can read our Venice travel route planner.

Traveling by car from Florence to Venice takes 3 hours. Alternatively, you can take a train; or fly. In April, daytime highs in Venice are 21°C, while nighttime lows are 11°C. On the 15th (Wed), you're off to Galway.
more less 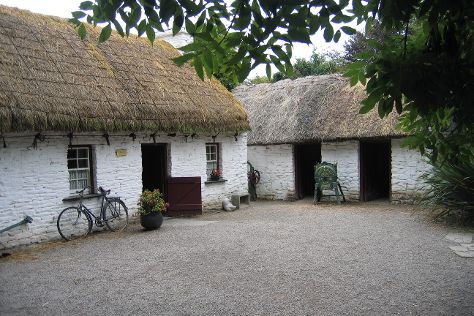 City of the Tribes

A major hub for visitors exploring Ireland's western regions, Galway serves as a city of art and culture, renowned for its vibrant lifestyle and numerous festivals.

Venture out of the city with trips to Bunratty Castle & Folk Park (in Bunratty), Cliffs of Moher (in Liscannor) and Kylemore Abbey & Victorian Walled Garden (in Kylemore). The adventure continues: take an in-depth tour of Galway City Museum, admire the landmark architecture of Galway Cathedral, contemplate in the serene atmosphere at Corcomroe Abbey, and walk around Eyre Square.

To find more things to do, other places to visit, traveler tips, and other tourist information, you can read our Galway online day trip planner.

Traveling by combination of flight and train from Venice to Galway takes 9.5 hours. Alternatively, you can do a combination of car and ferry; or take a bus. The time zone difference moving from Central European Standard Time (CET) to Greenwich Mean Time (GMT) is minus 1 hour. Prepare for slightly colder weather when traveling from Venice in April: high temperatures in Galway hover around 12°C and lows are around 3°C. Finish your sightseeing early on the 18th (Sat) to allow enough time to drive to Dublin.
more less

Things to do in Galway

A history spanning over a thousand years, vibrant nightlife, and a mix of Georgian and modern architecture make Dublin a popular European tourist destination.

Start off your visit on the 19th (Sun): steep yourself in history at Kilmainham Gaol Museum, then see the interesting displays at Guinness Storehouse, then visit Temple Bar, and finally pause for some photo ops at James Joyce Statue. Get ready for a full day of sightseeing on the 20th (Mon): don't miss a visit to The Spire, browse the collection at The Book of Kells and the Old Library Exhibition, then stroll around St Stephens Green, and finally get the lay of the land with Walking tours.

To see traveler tips, maps, ratings, and other tourist information, you can read our Dublin trip app.

Traveling by car from Galway to Dublin takes 2.5 hours. Alternatively, you can take a bus; or take a train. In April in Dublin, expect temperatures between 13°C during the day and 3°C at night. You'll set off for home on the 21st (Tue).
more less

Things to do in Dublin