To see other places to visit, ratings, maps, and other tourist information, read our Turin trip tool.

Sydney, Australia to Turin is an approximately 27- hour combination of flight and train. You can also fly; or do a combination of flight and bus. The time zone changes from Australian Eastern Standard Time to Central European Standard Time, which is usually a -9 hour difference. In December, Turin is much colder than Sydney - with highs of 8°C and lows of 3°C. Finish your sightseeing early on the 25th (Sun) so you can drive to Greve in Chianti.
more less

To find photos, other places to visit, and tourist information, refer to the Greve in Chianti trip itinerary website.

Traveling by car from Turin to Greve in Chianti takes 4.5 hours. Alternatively, you can do a combination of train and bus; or do a combination of flight, train, and bus. When traveling from Turin in December, plan for a bit warmer days and about the same nights in Greve in Chianti: temperatures range from 15°C by day to 4°C at night. Wrap up your sightseeing on the 29th (Thu) early enough to drive to Venice.
more less

Things to do in Greve in Chianti

Get outdoors at Blue Moon and Giudecca. Explore hidden gems such as Dorsoduro and Basilica di Santa Maria della Salute. Change things up with these side-trips from Venice: Vini Molon Luigino - Venezia (in San Dona Di Piave), Romeo Lazzarotto (in Lorenzaga) and Savian Vini (in Annone Veneto). And it doesn't end there: learn about winemaking at Cantina Marco Polo 6811, contemplate the waterfront views at Canal Grande, look for gifts at Oreficeria Boscolo Gioie, and snap pictures at Ponte di Rialto.

For maps, other places to visit, ratings, and other tourist information, read Venice road trip planner.

Traveling by car from Greve in Chianti to Venice takes 3 hours. Alternatively, you can do a combination of bus and train; or take a bus. Prepare for slightly colder weather when traveling from Greve in Chianti in December: high temperatures in Venice hover around 11°C and lows are around 1°C. Finish up your sightseeing early on the 1st (Sun) so you can travel to Naples.
more less

©
Naples is the capital of the Italian region Campania and the third-largest municipality in Italy after Rome and Milan. On the 1st (Sun), explore the ancient world of Pompeii Archaeological Park, then don't miss a visit to Spaccanapoli, and then steep yourself in history at Teatro Greco-Romano.

To find photos, reviews, maps, and tourist information, you can read our Naples itinerary planning app.

Traveling by flight from Venice to Naples takes 4 hours. Alternatively, you can do a combination of flight and train; or drive. Traveling from Venice in January, expect Naples to be a bit warmer, temps between 15°C and 6°C. Wrap up your sightseeing on the 1st (Sun) early enough to take a train to Rome.
more less 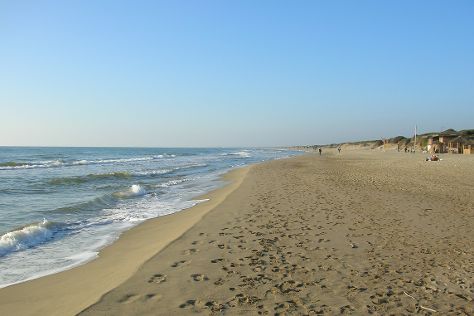 Kick off your visit on the 2nd (Mon): tour the pleasant surroundings at Acqua e Sale - Stabilimento Balneare. Here are some ideas for day two: wander the streets of Trastevere, kick back and relax at Oasi Naturista, and then take in the architecture and atmosphere at St. Clement Basilica.

For ratings, more things to do, traveler tips, and other tourist information, read our Rome trip planner.

You can take a train from Naples to Rome in 1.5 hours. Alternatively, you can drive; or take a bus. In January, daily temperatures in Rome can reach 15°C, while at night they dip to 4°C. Finish your sightseeing early on the 3rd (Tue) to allow enough time to travel back home.
more less