On the 11th (Sat), make a trip to Trevi Fountain, delve into the distant past at Pantheon, take in the architecture and atmosphere at St. Peter's Basilica, then get to know the fascinating history of Piazza Navona, and finally explore the ancient world of Colosseum. On your second day here, explore the ancient world of Catacombe di San Callisto, steep yourself in history at Palatine Hill, don't miss a visit to Roman Forum, then wander the streets of Via Condotti, and finally stop by Vertecchi.

For ratings, other places to visit, maps, and more tourist information, go to the Rome trip itinerary app .

Bangkok, Thailand to Rome is an approximately 15.5-hour flight. You can also do a combination of flight and train. The time zone difference moving from Indochina Time (ICT) to Central European Time (CET) is minus 6 hours. Traveling from Bangkok in April, things will get much colder in Rome: highs are around 24°C and lows about 11°C. Wrap up your sightseeing on the 12th (Sun) early enough to take a train to Florence.
more less

Start off your visit on the 13th (Mon): contemplate in the serene atmosphere at Cathedral of Santa Maria del Fiore, explore the world behind art at Pitti Palace, make a trip to Piazzale Michelangelo, then shop like a local with Art Gallery Studio Iguarnieri, and finally admire the masterpieces at Academy Of Florence Art Gallery. Here are some ideas for day two: stop by M.G. Design, get engrossed in the history at Basilica di Santa Croce, and then do a tasting at Castello del Trebbio.

Take a train from Rome to Florence in 2 hours. Alternatively, you can drive; or fly. Expect a daytime high around 22°C in April, and nighttime lows around 11°C. Wrap up your sightseeing on the 14th (Tue) to allow time to take a train to Venice.
more less

Start off your visit on the 15th (Wed): steep yourself in history at Doge's Palace, make a trip to Piazza San Marco, then snap pictures at Ponte di Rialto, and finally contemplate the waterfront views at Canal Grande. Get ready for a full day of sightseeing on the 16th (Thu): explore the world behind art at Peggy Guggenheim Collection, then steep yourself in history at Ponte dei Sospiri, then admire the striking features of Basilica di San Marco, and finally admire the masterpieces at Gallerie dell'Accademia.

To find maps, where to stay, other places to visit, and tourist information, use the Venice online journey planner .

Traveling by train from Florence to Venice takes 2.5 hours. Alternatively, you can drive; or take a bus. Expect a daytime high around 21°C in April, and nighttime lows around 11°C. Finish up your sightseeing early on the 16th (Thu) so you can catch the train to Milan.
more less

On the 17th (Fri), step into the grandiose world of Castello Sforzesco, take an in-depth tour of Basilica di Sant'Ambrogio, then take in the spiritual surroundings of Duomo di Milano, and finally admire the landmark architecture of Galleria Vittorio Emanuele II.

To see photos, maps, more things to do, and tourist information, go to the Milan day trip planning tool .

Take a train from Venice to Milan in 2.5 hours. Alternatively, you can drive; or do a combination of train and flight. In April, plan for daily highs up to 22°C, and evening lows to 9°C. Finish your sightseeing early on the 18th (Sat) so you can drive to Lucerne.
more less 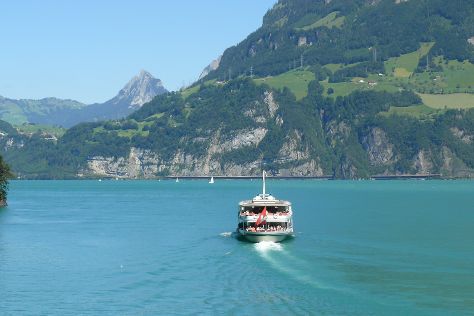 For shopping fun, head to Bahnhofstrasse or Altstadt Luzern. Get outdoors at Mt Pilatus and Lake Zurich. Step out of Lucerne with an excursion to Old Town in Zurich--about 46 minutes away. The adventure continues: explore the activities along Lake Lucerne, appreciate the history behind Lion Monument, and look and learn at Verkehrshaus der Schweiz.

To see reviews, other places to visit, and tourist information, you can read our Lucerne road trip planning app .

Getting from Milan to Lucerne by car takes about 3 hours. Other options: take a train; or do a combination of flight and train. In April, Lucerne is slightly colder than Milan - with highs of 17°C and lows of 5°C. Finish your sightseeing early on the 20th (Mon) to allow enough time to travel back home.
more less

Zurich
Find places to stay Apr 18 — 20:
Hotels on TripAdvisor
Homes on Airbnb
Highlights from your plan